My name is Santa Randy Gabrelcik. I take great pride in being a professional Santa and remain in character throughout the entire year, not just for 6 to 8 weeks in the winter. I capture the attention of children of all ages year round in many locations. I attended the Marines Graduation Ceremony of my nephew in San Diego, CA where I was well received by many generals and sergeants who said I wore the most authentic outfit ever worn to a graduation ceremony at the Marine Base. I was asked to take pictures with several Marines. I visited the San Diego Zoo while in California and was asked to pose in several photos with families. This is the best of life!!!

My wife has provided me with a very unique “year round” wardrobe which revolves around red and green colors. (See photo gallery.) In the summer, you will find me in red and green shorts and shirts, jogging suits to include red and green Nike tennis shoes. On Sundays, you will see me in those same colors as well; in dress up sport coats, Christmas print shirts and slacks, and red leather dress shoes. I really am known as Santa where ever I go! I even own a red tuxedo for those holiday winter weddings that Santa is invited to.

Besides the "traditional full Santa suit" requested by most parents for home visits, I have added a long red velvet coat with gold trim and fur for those who like the "Father Christmas" old time look. I also do the "workshop" look with red velvet pants with suspenders and beautifully sewn Christmas print shirts with special matching buttons to coordinate with the prints. The professional image of Santa is of utmost importance to me. I have a beautiful hand made Santa chair with gold leather upholstery that I can bring to special events when needed for beautiful photo opportunities. 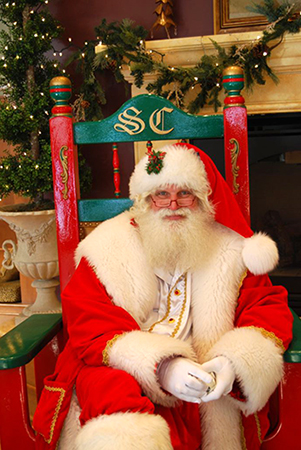 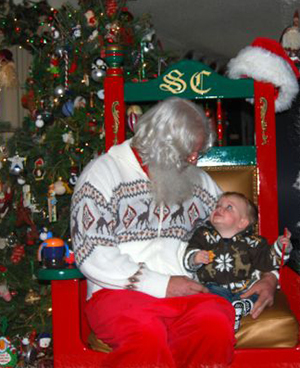 I am the grandfather of one beautiful granddaughter, father of 3 children and have been married to my wife for 39 years. I believe in high Christian moral standards. I am very involved in my parish - Our Lady of the Lake Catholic Church, where I have been a member for 39 years. My wife and I co-chair the "Children's Games" at the Incredible Festival which takes place for three days in September.

I keep “up to date” in my Santa persona by attending workshops at Santa conventions. I created a special line of holiday fragrances that you can find at SantaScents.  I have participated in many vendor shows at Santa Conventions with our SantaSCents product line since 2006. We sell world wide and have orders from Denmark, Australia, New Zealand, England, Canada and U.S. year round. In July of 2016, we will celebrate our 10 year anniversary of the debut of our product in Branson, MO at the Discover Santa Convention Reunion!

In the summer months, I spend time building houses with real fireplaces and chimneys with my company, Gabrelcik Enterprises, Inc.